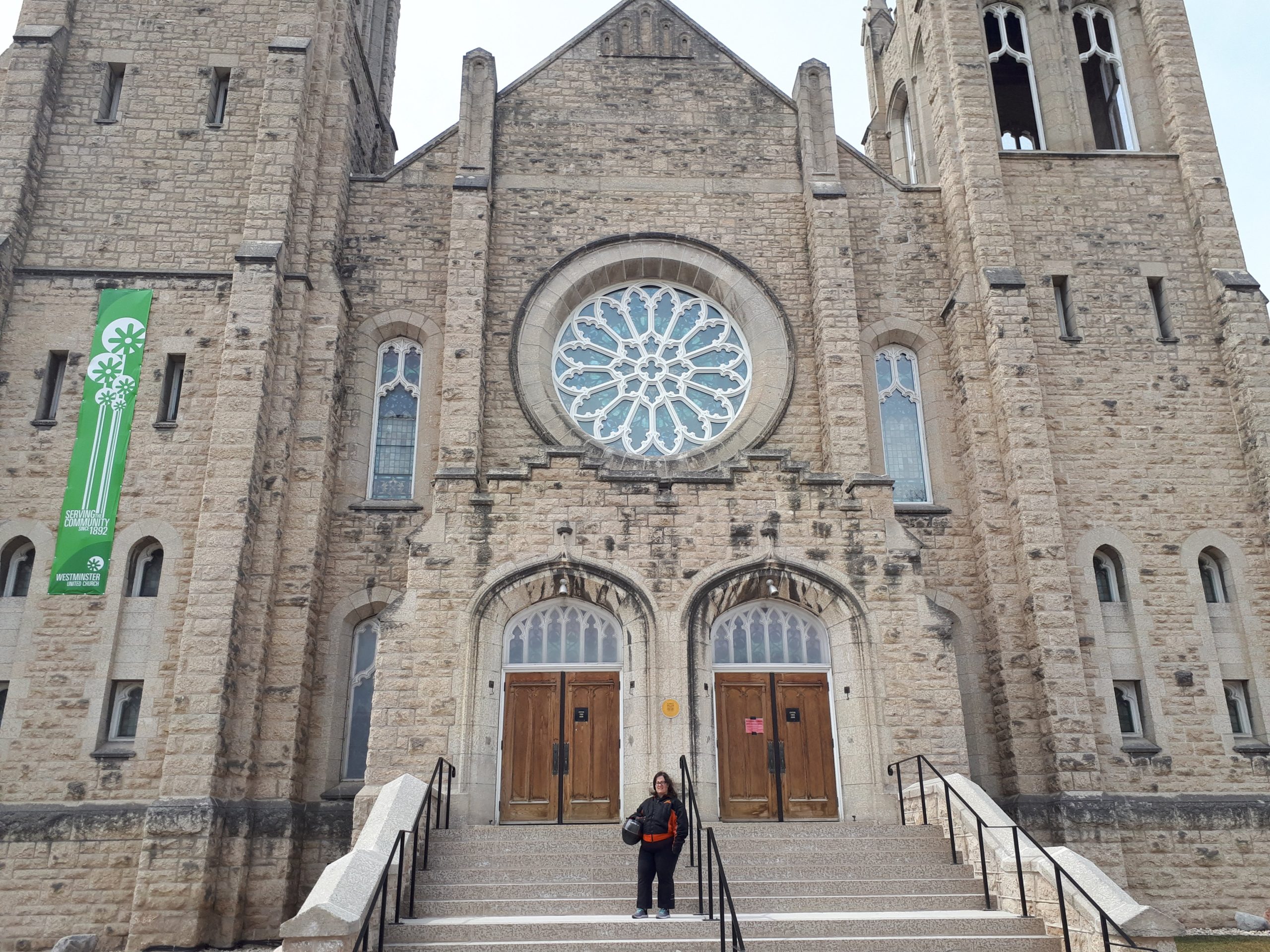 Manitoba has nearly 2,400 monuments in all areas of the province but only 42 of them carry the municipal monument designation. This means these 42 are legally designated historic sites with important significance to their community. An exclusive honour reserved for the most important historic sites.

Of those 42 municipal monuments, 11 of them are within Winnipeg city limits and can easily be visited on a cloudy, cool, breezy afternoon. Preferably on a long weekend when the traffic of all kinds is light and easy. When working toward earning your Manitoba by Motorcycle Monuments patch please be aware that no matter how many monuments you visit in Winnipeg it will only count as one (1), encouraging you to get out of the city to explore more of Manitoba on your motorcycle.

Detailed information including maps, GPS coordinates, photos, and descriptions of each of these Manitoba municipal monuments can be obtained from the Manitoba Historical Society website. Read on for a summary of each of the Winnipeg-based monuments along with a link to the location on Google Maps. Quickly plan out your next Sunday morning ride and learn more about the historical importance of these Winnipeg destinations.

Augustine United Church was founded in 1887 and moved into its present building in 1903. It was once a large, active Presbyterian congregation of mainly middle- and upper-income families living south of the Assiniboine River. In its heyday, the sanctuary, including the balcony, was filled several times on Sunday for multiple worship services. Considered one of Winnipeg’s finest examples of Gothic Revival architecture, it is distinguished by its use of the pointed arch, flying buttresses, and rib vault.

This war memorial features the likenesses of two soldiers, one standing over a fallen comrade. The Belgian War Memorial was built at a time when spirits were down all across western Canada. The Great Depression had caused hardships throughout the prairies and Winnipeg had been equally hard hit. The idea of a ceremony to honour local heroes was met with some enthusiasm as a way of escaping the problems of the day. It is familiar not only to the Belgian community and residents of St. Boniface, but also to citizens throughout the city. Be careful with your photography as this is located on the boulevard of a busy intersection.

Located on the north side of Graham Avenue between Donald and Smith street this incredible stone church is another fine example of Gothic architecture style. The irregular outline, with attached parish hall and bell tower, recalls English parish churches. Holy Trinity is a landmark in the heart of Winnipeg and a sight to behold amongst the cities modern downtown landscape. Downtown Winnipeg is always under construction, congested with traffic, and filled with one-way streets so it is best to ride out here during off-hours so you can park and peruse the wonderful location.

Two buildings on Bannatyne Avenue house the Manitoba Medical College. At the entrance to 770 Bannatyne are plaques commemorating the founders of the college, as well as a plaque listing its graduates and students who lost their lives in the North West Rebellion (1885), South African War / Boer War (1900), and the First World War (1914-1918). Tucked in at the end of a dead-end street, there is not too much to see or explore at this monument after hours.

Built in 1912, on land granted to the “McBeath” family around 1817, moving from their original grant to allow the building of the community’s first church (now St. John’s Cathedral). But 30 metres from the original building on the property. The McBeth House was built by descendants of the original Selkirk settlers. Off to the left of McBeth house is a well-maintained public gravel path that is well worth the walk. There is a tall grass prairie to enjoy just past McBeth house and mid-late summer is when tall grass prairies have a lot of life in them. The path, eventually, leads to a nice walk along the river with some nice views.

Silver Heights was a stopping place on the Portage Trail and refuge of settlers during the floods of 1826 and 1852. Here, in 1856, John Rowand Jr. of the Hudson’s Bay Company built a log house that was enlarged and occupied by James McKay, Speaker of the Manitoba Legislative Council. A 1958 Historic Sites Advisory Board of Manitoba plaque and structure is located on the west side of Mount Royal Road at the corner of Traill Avenue. Until I read about this location on the MHS website I thought it was just an entrance to a neighbourhood, not knowing the historic significance.

Dating back to 1818, Université de Saint-Boniface is the very first educational institution in Western Canada. Established by Father Norbert Provencher, it had its humble beginnings in a small house where Latin was taught to the boys of the French-speaking Red River Settlement, thus introducing a tradition of excellence in education. In 1922 a major fire destroyed the institution, including its registries and the 20,000-volume library. In response to this tragedy, Mgr Arthur Béliveau, Archbishop of St. Boniface, donated the new seminary (Le Petit Séminaire) located at 200 De la Cathédrale Avenue, the present location of USB. Since its inception, USB has been a pivotal point, a protector, and a promoter of French life and culture.

Upper Fort Garry, established by the Hudson Bay Company, is arguably one of the most significant historic sites in western Canada. It was the 5th European trading post near the junction of the Red and Assiniboine rivers. Indigenous peoples had traded in the area for centuries and it was quite simple “smart business” to have a fort at the site of the Red and Assiniboine Rivers. Today, you can visit Upper Fort Garry Provincial Park and experience history in a totally different way. There is no reconstruction or reenactment. The story of Upper Fort Garry is presented through interpretation, art, and technology. Day or evening, this is a very cool site to visit. Parking can be difficult at all times though.

Built in 1914, Waddell Fountain is Central Park’s most well-known structure and another great example of Gothic Revival architecture. The stone fountain sits on a granite base and has a concrete basement, where the water pump is located. If you look at it from different angles, you will see that the fountain is identically arranged on all sides, with arch and floral motifs, pinnacles, and four lions’ heads that supply the water. The fountain was constructed in memory of Emily Margaret Waddell, who lived in Winnipeg with her husband Thomas Waddell. Plenty of parking and Central Park is always a major hub of activity in Winnipeg. Lots to see and enjoy, more than a stop and go on most days.

For over one hundred years Westminster Church has served its community, offering opportunities for people to gather and worship. In 1992, both the City of Winnipeg and the Province of Manitoba declared Westminster Church a heritage building. In 1999, Westminster Church was named a West Broadway Heritage Site and was included on the walking tour of sites in that area.

Construction of Winnipeg’s First City Hall, located on Main Street between William and Market Avenues, began in 1875. For a city then undergoing modest but steady growth, the laying of the cornerstone in August of 1875 was greeted with a great sense of occasion. Local businesses declared the day a holiday and over 500 people were said to have witnessed the ceremony. Unfortunately, the building itself suffered from chronic structural problems forcing civic authorities to try to keep it standing through the use of props and beams. Their efforts came to naught and the building was eventually demolished in 1883. In its place, Council endorsed a proposal to construct a New City Hall modeled on the “Civic Centre” concept. You cannot talk about a city’s historic locations without talking about City Hall.

Learn more about the Manitoba by Motorcycle Monuments Patch here. 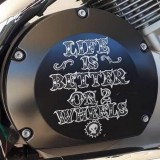 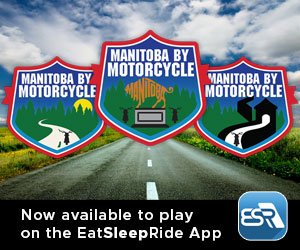